As I´ve often said I don´t believe in coincidences so you can make what you want about the fact that in my post about Gail Kim honoring her brithday a few days back I included the trailer for the Karl May movie Der Ölprinz because Heinz Erhardt was in it ( he also was born that day ) as if I knew I would come back to that subject Today, on Karl May´s birthday. 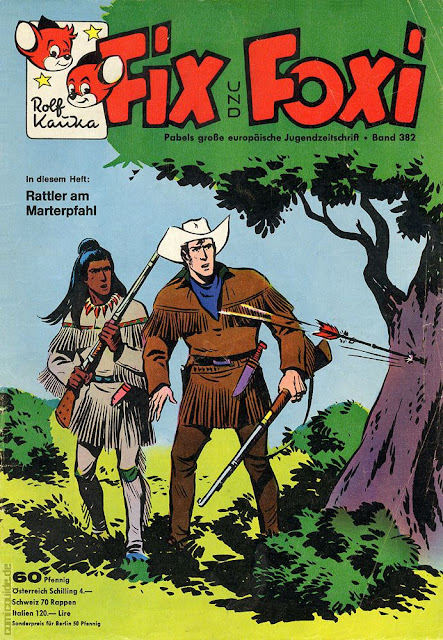 I have written about Karl May and the Winnetou movies in a few posts so I decided to write a bit about the comics since this is still a comic blog despite posts about movies, wrestling and hot movie and tv cult sirens.

Karl May is one of the most read german authors and the most translated one. He was probably the earliest german author to achieve rockstar like status which may have been in part because he claimed to be the Old Shatterhand narrator from his novels going as far as having gunsmiths build the famous rifles Bärentöter ( Bearkiller ), Silberbüchse ( Silverrifle ) and the Henrystutzen ( Henrycarbine ) from his books. Now when I think about Karl May the first thing I think about is of course the westerns of Winnetou, Old Shatterhand and Old Surehand but I never read much of the comic adaptions so I had to do some research. There are two names that you will most likely encounter when you look for WINNETOU comics.

The first one is Helmut Nickel who did the best and most commercially successful comic adaptions which were first published by the Walter Lehning Verlag between 1963 and 1966 in the regular comic book format. 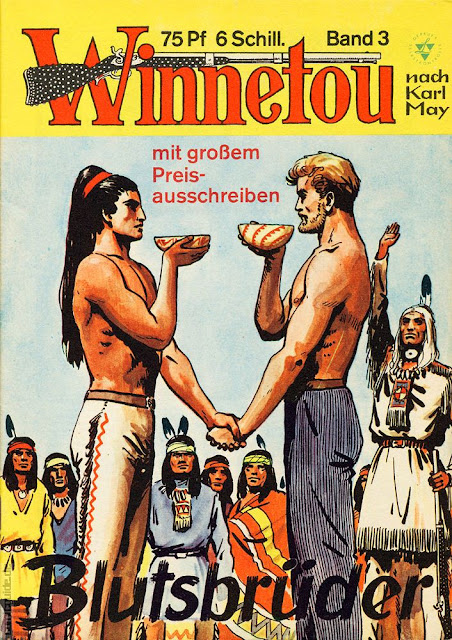 Not only had Helmut Nickel been a big fan of Karl May since infancy he also had studied ethnology which he brought into his work. His body language is impeccable, he always gave the different native american tribes distinctive features and he integrated nature and the landscapes - which were always a big part of Karl May´s travel reports - in his pages. 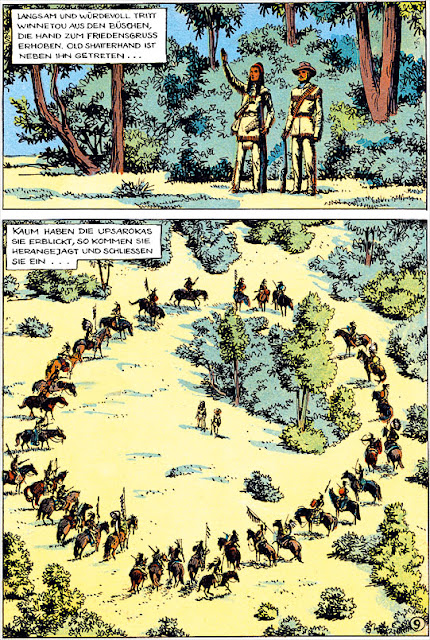 Originally Helmut Nickel wanted to become a veterinarian but because he wasn´t allowed to study in East Berlin he moved to West Berlin where he found out that his prefered course of study was not offered at the free academy so he chose ethnology, pre - colombian culture and art history.

To finance his studies he worked for an advertising studio where he came into contact with the comic publisher Gerstmayer. Beginning in 1954 he drew wild west stories, The Three Musketeers, The Count of Monte Christo and the futuristic Titanus based on a novel trilogy by Claus Eigk. 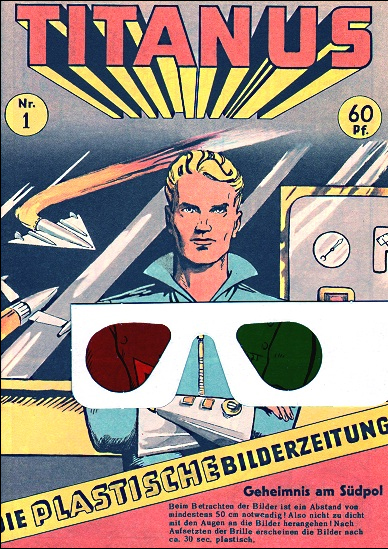 At the same time he created the series Don Pedro about the conquest of the Aztec empire by Hernando Cortez which was integrated as a back up series in Hot Jerry. All these comics didn´t have a long life span which was about to change when Helmut Nickel took charge of the comic series Robinson in 1955. During the second half of the 1950s Robinson was the only successful competition to the Lehning Verlag which dominated the market of adventure comics with its house artist Hansrudi Wäscher. 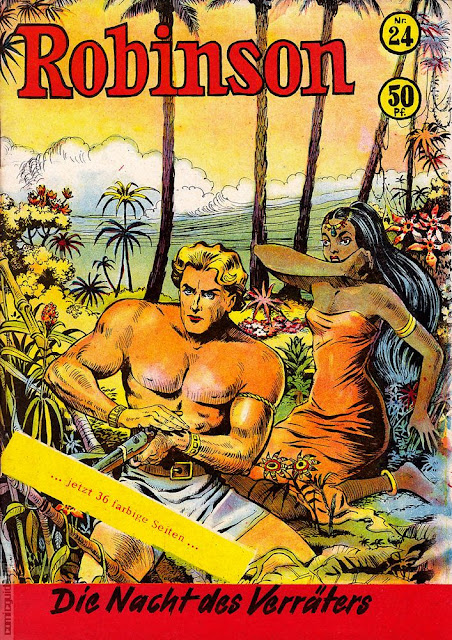 Nickel´s art captivated german readers with perfect compositions, great perspectives and varied graphics but the content might have been too much for the audience of children ages eight to fourteen. " Too text - heavy ! " was one of the main criticisms of the publisher. After his studies Helmut Nickel moved to New York where he worked as the curator of the Arms and Armor division of the New Yorker Metroploitan Museum. At the same time he took the offer of Walter Lehning to do a comic adaption of Karl May´s Winnetou stories. Nickel drew the comic until 1965 when the payments from Germany were delayed for months and then stopped. 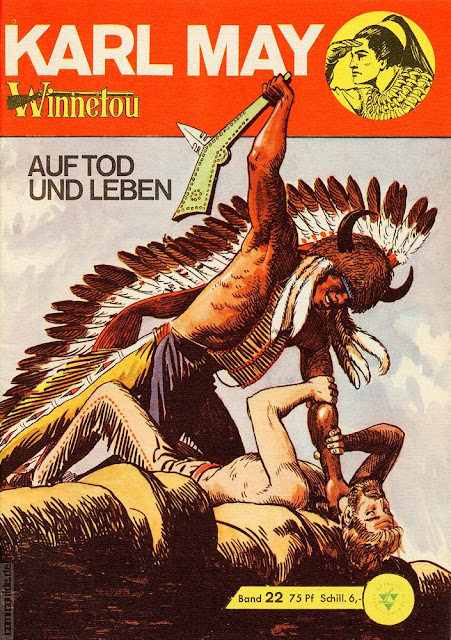 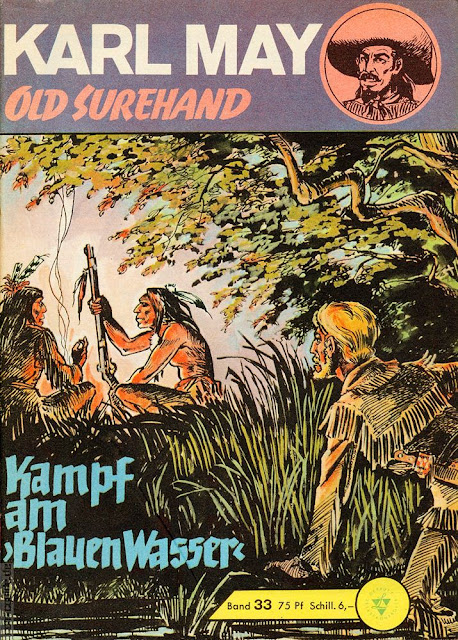 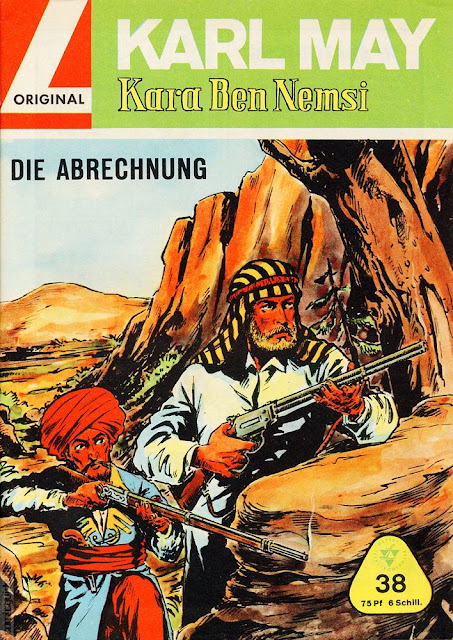 I could not find any info on who did the art on those books but later on OLD SUREHAND and KARA BEN NEMSI were published with KIT CARSON. 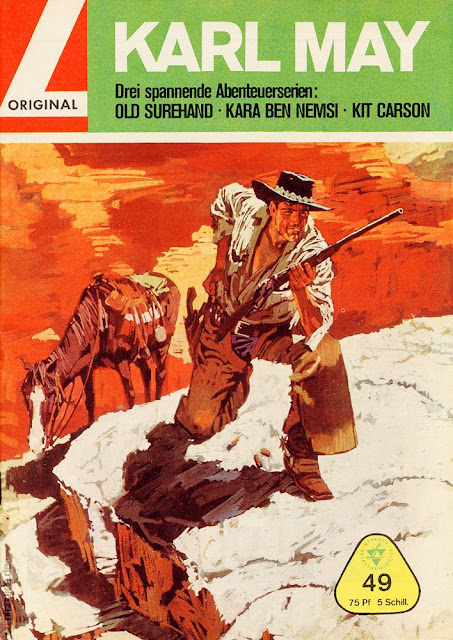 Helmut Nickel´s WINNETOU comic series was first reprinted by the SPLITTER Verlag in a album sized hardcover edition from 1989 to 1994. 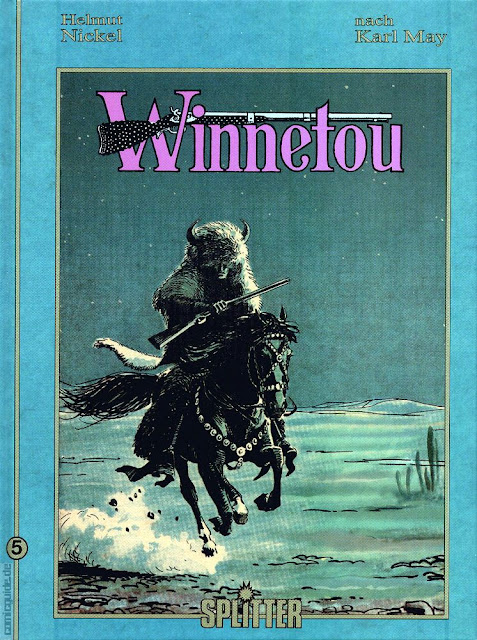 From 2012 to 2013 Verlag Sackmann und Hörndl a.k.a. comicplus+ did another hardcover edition with a limited print run of 1,000 copies. 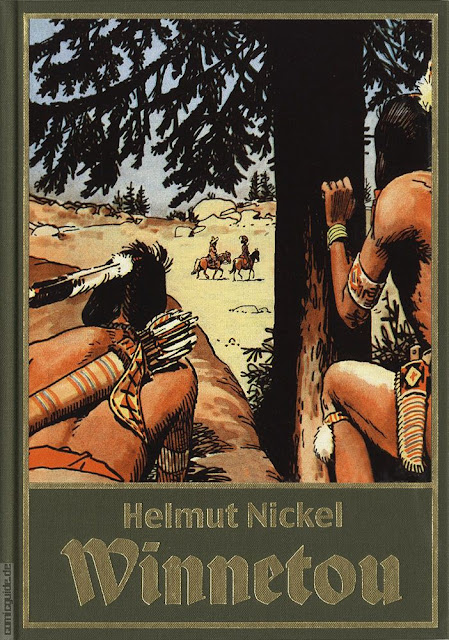 And because 2012 marked Karl May´s one hundredth birthday they did an over 400 pages thick special for the masses that include the first two volumes from the limited edition print run - without the editorial pages. 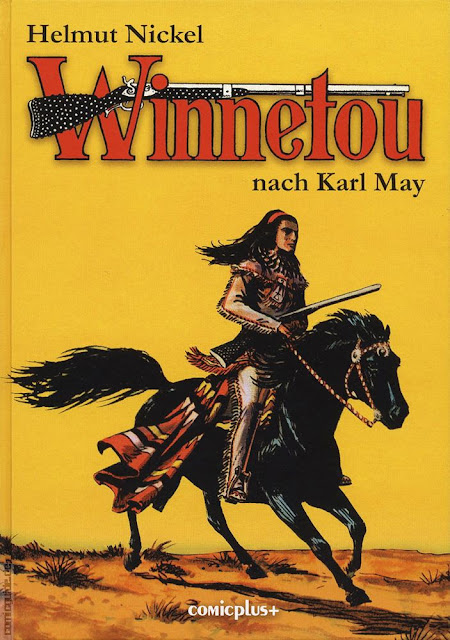 Now the Helmut Nickel WINNETOU was not the first comic adaption as you can see by the FIX UND FOXY cover on the top of this post. I´m not sure when this particular issue came out but it must have been before 1953 when the Zeichenfilmbuch comic by Walter Neugebauer was reprinted. 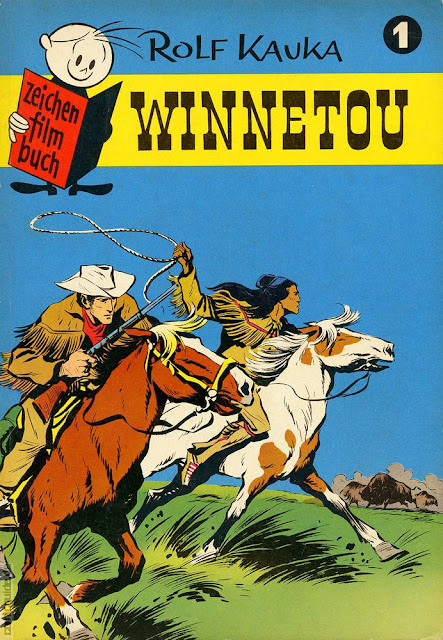 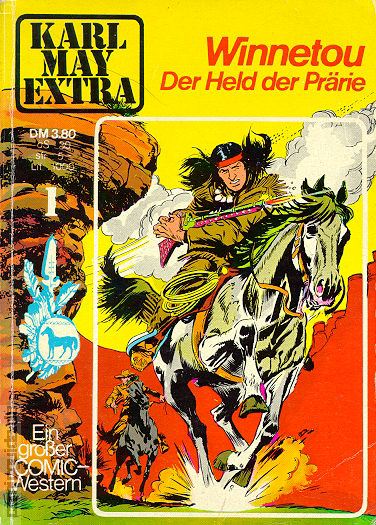 This series was republished in a limited edition by comicplus+ in 2013. 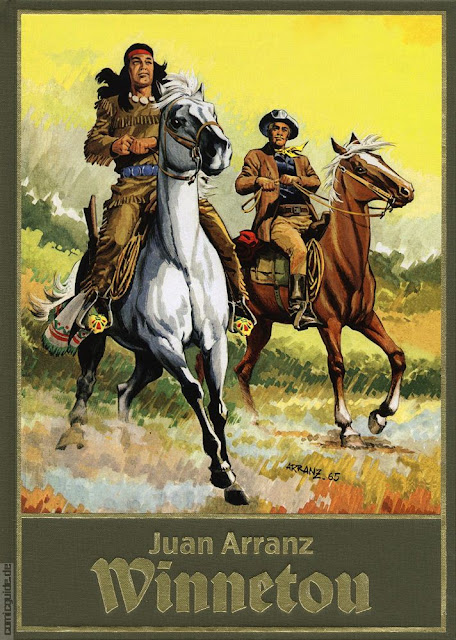 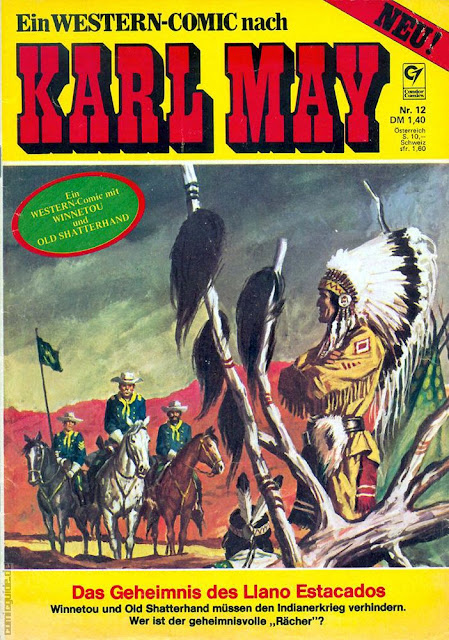 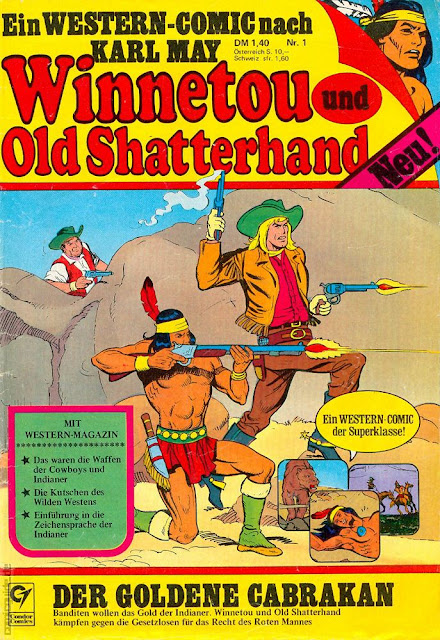 The next Winnetou comic came out by Wick from 1999 to 2007 although it had little to do with Karl May. The art is by belgian Willy Vandersteen who also did the very successful SUSKE EN WISKE ( published in english as Spike and Suzy, Luke and Luzy, Willy and Wanda or Bob and Bobette ). 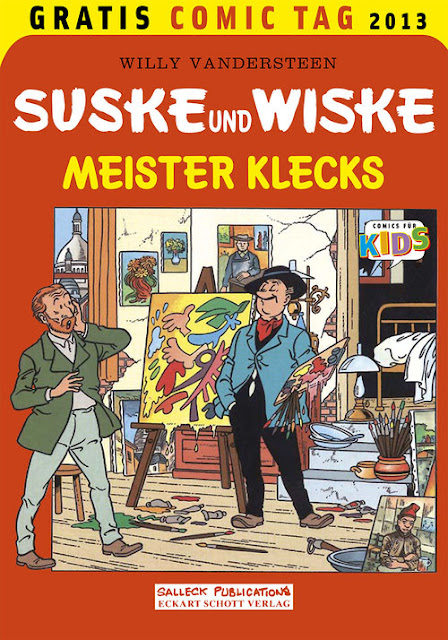 And this is the second name you will probably come across when looking for Karl May comics. The series was published by Standaard Uitgeverij from 1962 to 1987 and the only thing the comics have in common with the Karl May books are the names of the main characters. Despite all this the series was successful enough to last 83 issues which is no small feat. 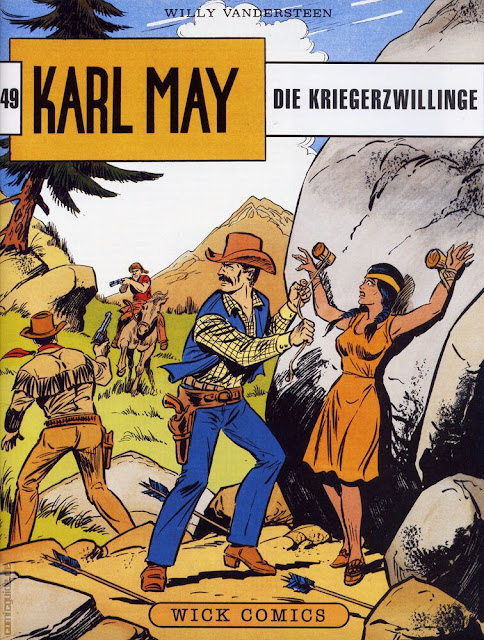 Although the studio of Willy Vandersteen was not new to western comics as they produced the BESSY comics which were a big thing in Germany. 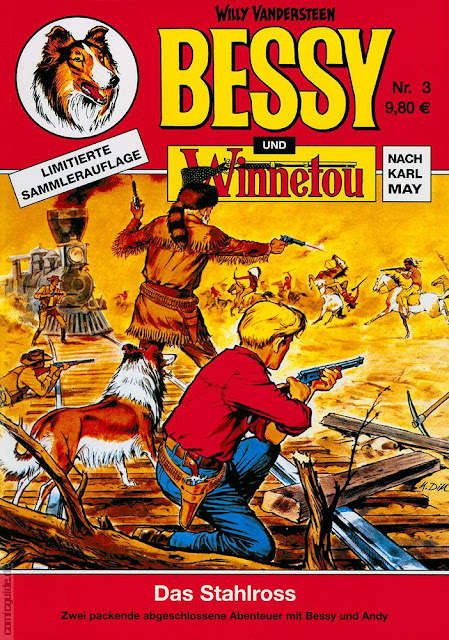 And speaking about comics which were big when I was a kid, when superheroes and especially Batman became hugely popular in Belgium and Germany thanks to the campy tv series Willy Vandersteen was asked to create a comic series to capitalize on that trend so he turned the strongman from the SUSKE EN WISKE comics Jerome into a superhero.

The comic was called WASTL in Germany and between 1968 and 1972 a total of 173 stories were produced with a print run of 150,000 at the height of its popularity. Sadly due to the declining quality of the stories the series ended much to my chagrin as I was heavily into that series. 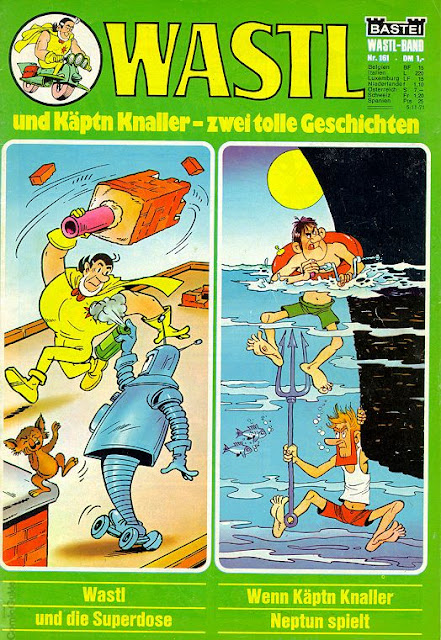 In 2011 there also was a tribute book to Helmut Nickel by Edition 52. 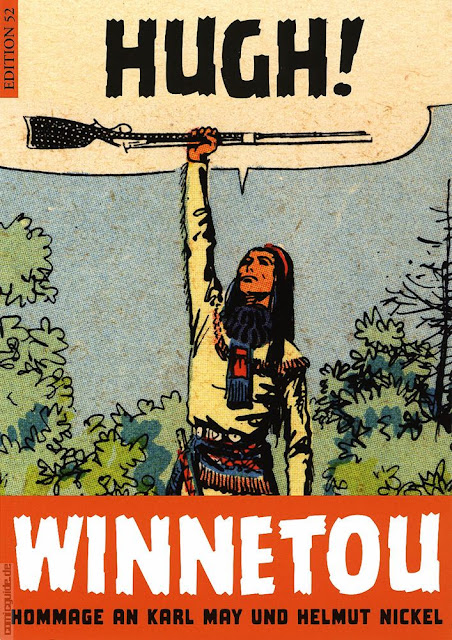 And although it was not available to the general public I should mention that the german comic organisation INCOS released a WINNETOU UND OLD SHATTERHAND comic album in 2012. It was limited to 200 copies and contained a comic by hungarian artist Ernö Zorad which was first published in 1983 in the east german youth publication TROMMEL. 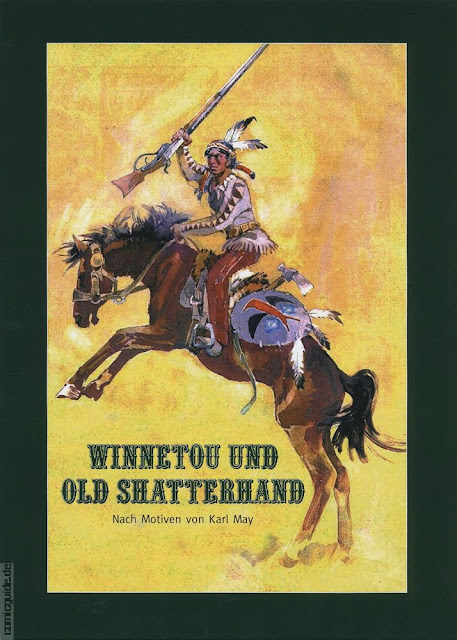 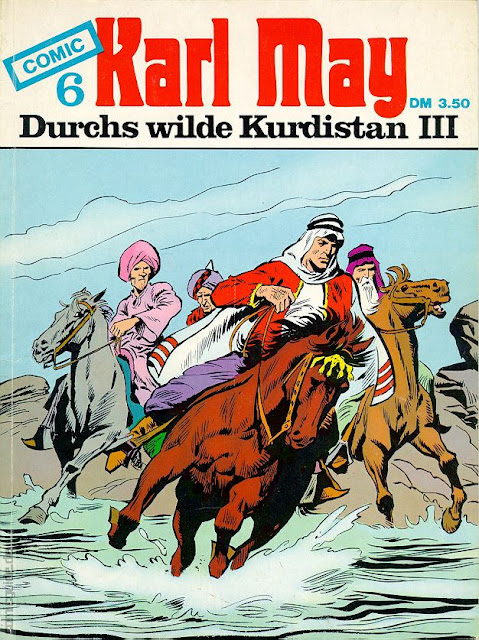 There also were some foreign editions like in Spain but the post is long enough with only the german publications. And I want to do other things Today ( like drool about Elke Sommer´s cleavage in Unter Geiern ).

And speaking about impressive cleavages from my youth : since I didn´t post Yesterday I couldn´t give a shout out to Playmate of the Month April in 1986, Teri Weigel who celebrated her 54th birthday. Because of Teri´s perplexing physique and her protruding torpedo shaped sweater puppies she became quite popular and was in a few specials from PLAYBOY. She also was one of the few playmates who also appeared in PENTHOUSE although not as a Pet of the Month. She was just everywhere during the 80s. She later had her breasts enlarged and did porn but I think she looked best in her famous appearances as Jade on Married with Children.

Since we´re on the subject of centerfolds and birthdays I have to mention another Andy Sidaris related anniversary. Penthouse Pet Samatha Phillips who played Samatha Maxx, the buxom blonde with the high squirt factor in The Dallas Connection ( a.k.a. Deadworks ) and who holds the record for getting her nude pictures published in the most countries turns 50.

Well - rounded in more than just the physical sense, Sam is a woman for the new millenium : she´s ambitious and she´s busy and not above using her spectacular naked body as fame currency. Sam has been a member of an all girl rock group, The Lykettes, a talk show host. a reality tv host, radio DJ, a spokesmodel, she has hosted any kind of show that exists on the planet and she became a pop icon as one of the most sought after models of the 80s. However the walking blow up sex doll template reaped the greatest exposure in the realm of sexploitation quickie flicks thanks to her rack - tastic 34D - 26 - 35 measurements and she´s famous for producing the Busty Cops movies starring all her centerfold friends.

Sadly she was only in one Andy Sidaris movie but you can see her naked in classics like Hot Springs Hotel, Passion Cove, Bedtime Stories, Fallen Angel, The Regina Pierce Affair, Passion´s Obsession and Sexual Malice.

Our first video is a documentary about the author Karl May.

On Karl May´s 100th birthday in 2012 this special edition of Nachtstudio took a look at the relationship between the germans and Karl May.

And because I had to include cult siren Elke Sommer in some way here is the trailer for Unter Geiern ( Among Vultures ) also starring Götz George and Terence Hill ( still under his name as Mario Girotti ). Like always Pierre Brice played Winnetou but instead of Old Shatterhand played by Lex Barker he teamed up with Old Surehand played by Stewart Granger who reprise the role two more times and got a lot of german fans from this.

There also was a Winnetou cartoon although I could only find a short bit.

Naturally the germans had to make a political correct version for new audiences called WinneToons which naturally is one big crapfest.

Originally I wanted to add the movie Durch die Wüste from 1936 but since the embedding was disabled for that video I´m going to include german - british Schlager singer Ireen Sheer who celebrates her 67th birthday Today. In 1974 she represented Luxembourg in the Eurovision Song Contest but here she is with Feuer which gained Germany a sixth place.

New to the blog ? Everything you need to know about TALES FROM THE KRYPTONIAN : top ten posts / more posts of interest / best of the best

SUBZERO
Unemployed comicbook artist at day, secret crimefighting blogger at night I was born into a world I never made. I always loved comics and even wrote and drew some. Together with my late brother who was much more interested in making comics we even self-published a comic called POWER FREAKS that is infamous in Germany. Due to financial troubles and artistic differences sadly there has been only one issue so far. Being more of a reader than a collector of comics I always read the foreign versions of the american comics what led me to start this little blog. If you have any comment ( or want to send me some review copies ) please drop me a line in the comment section or send me an e - mail.